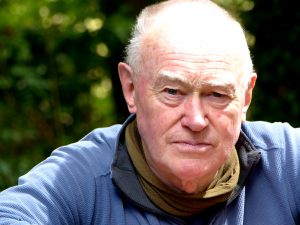 In a painting career spanning 50 years, Gordon has demonstrated a diversity of interests and skills ranging from illustrations of archaeological reconstructions, glassware designs, books, greetings cards, limited edition prints and landscape paintings from around the world.

He was described by one art critic as a contemporary English artist whose simple compositional elements and nostalgic pastoral scenery convey a comforting sense of calm.

But there is another side to his open and welcoming style namely his graphic, disturbing images created during 15 years on call as a war artist with the Royal Marines and the Royal Netherlands Marine Corps. Armed with a sketchbook and camera – plus body armour – Gordon has recorded firsthand the ravages of conflict in Bosnia, Eritrea, Ethiopia, Kosovo, Iraq and Afghanistan.